Vodafone, Comcast unit SKY and WindTre on Monday urged Italy to create a single broadband communications network that can guarantee neutrality and independence for all players.

FACTBOX-Latest on the worldwide spread of coronavirus

The death toll from the spread of the coronavirus in the United States approached over 200,000 and European countries mulled tightening restrictions to curb a sharp resurgence in cases, while global stocks hit their lowest in seven weeks on Monday.

Latin American stocks and currencies took a beating on Monday as investors worried that rising COVID-19 cases could deal another blow to the global economy, while sliding oil and copper prices added pressure to the region's exporters. The safe haven U.S. dollar caught a bid and Wall Street stocks sold off on concerns that a resurgence of COVID-19 infections this autumn could trigger another round of business shutdo

The television audience for Sunday's Emmy awards dropped to a record low of 6.1 million viewers, according to data released by Walt Disney Co's ABC on Monday.

U.S. natural gas futures plunged over 10% on Monday to a seven-week low on forecasts for less demand over the next two weeks than previously expected due to a decline in liquefied natural gas (LNG) exports. Gas flows to LNG export plants dropped because of planned maintenance at Dominion Energy Inc's Cove Point in Maryland, the continued outage at Cameron in Louisiana and as some ships steer clear of Tropical Storm Beta, which is expected to las

The television audience for Sunday's Emmy awards dropped to a record low of 6.1 million viewers, according to data released by Walt Disney Co's ABC on Monday.

A U.S. bank regulator announced Monday it had fined three former executives at Wells Fargo Bank for their roles in the company's sales practices scandal.

Volkswagen AG will provide owners of its ID.4 compact electric sport utility vehicle with three years of unlimited charging in the United States at no additional cost to the vehicle's price, the German automaker said on Monday.

Santander on Monday called a general shareholders' meeting on October 27 to approve a 0.10 euros per share cash dividend to be paid in 2021, pending a green light from the European Central Bank.

Gold miner B2Gold on Monday sought to reassure investors that Mali's political situation was improving after a military coup last month hit shares in the company and other Mali-focused miners. 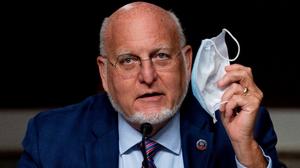