Gold medallist pole vaulter Katerina Stefanidi, a vocal proponent for postponing the Tokyo Games last year, is backing the Games to be held this July, with or without spectators.

Olympic shot put champion Ryan Crouser of the United States set a world indoor record of 22.82 metres at the American Track League series opener in Fayetteville, AR. on Sunday. Crouser, who won the gold medal at the 2016 Rio Olympics, bettered the 32-year-old mark of 22.66m set by American Randy Barnes in 1989. (Reporting by Steve Keating in Toronto. Editing by Toby Davis)

World Cup winning U.S. midfielder Megan Rapinoe said she would be "devastated" if this year's Tokyo Olympics are cancelled due to the COVID-19 pandemic.

Olympics-Swimming Australia eyes Plan B in case of Tokyo cancellation

Swimming Australia has started discussions about a replacement domestic or virtual international competition for its athletes in case the Tokyo Olympics are cancelled, president Kieren Perkins said.

From triumph of 1964 Olympics to coronavirus: Japan then and now

Japan hoped that hosting the 2020 Olympics would reprise the triumph of 1964, when it became the first Asian Olympics host and gained a huge economic boost, but the coronavirus - which postponed the Games for a year - has dampened those dreams.

The entire Olympic movement is united in its determination to ensure the Tokyo Games happen in July and August, International Olympic Committee (IOC) President Thomas Bach said in a video message to mark the six-month countdown to the opening ceremony.

The International Olympic Committee is working with the World Health Organization to get all athletes vaccinated in a bid to save the Tokyo Games, The Telegraph reported on Friday.

UPDATE 8-Japan and IOC deny that Olympics will be cancelled

The head of Japan's national Olympic committee on Friday dismissed media reports that the Japanese government has privately concluded it will have to cancel the Tokyo 2020 Olympics and said preparations were under way for the Games to go ahead as planned.

World Athletics President Sebastian Coe said there is "an absolute, cast iron determination" to deliver the Tokyo Olympics and the arrival of COVID-19 vaccines and ability of athletes to train mean the situation is much better than when the Games were postponed last year.

Tokyo Governor Yuriko Koike said on Friday that there was no talk of cancelling or delaying the Summer Olympics and that a protest should be lodged over a media report of a possible cancellation.

Six months from the start of the rearranged Olympics, Tokyo 2020 CEO Toshiro Muto is cautiously hopeful that successful rollouts of COVID-19 vaccines can help lead to the safe and successful staging of the world's largest sporting event. 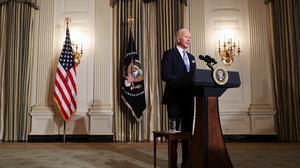