7 key things to know about the Turkish operation in Syria 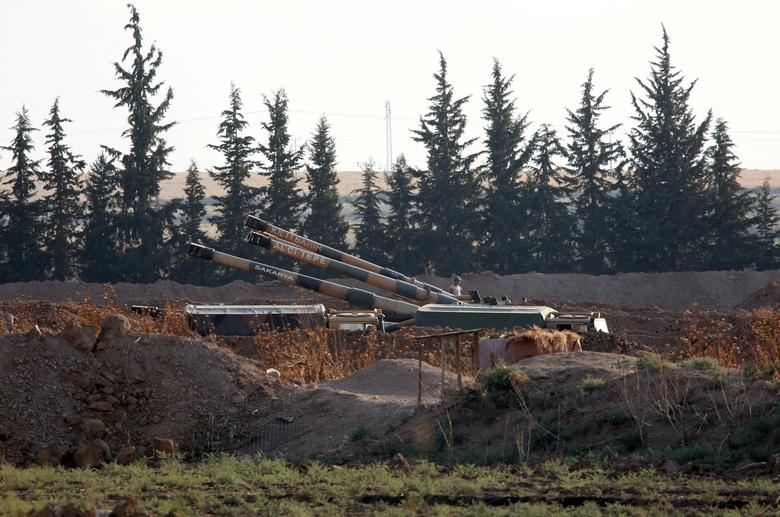 Turkey launched a military operation against Kurdish fighters in northeast Syria on Wednesday, with air strikemore

Reuters / 2019年 10月 7日 星期一
Turkey launched a military operation against Kurdish fighters in northeast Syria on Wednesday, with air strikes hitting the border town of Ras al Ain. The operation could reshape the map of the Syrian conflict once again, dealing a blow to Kurdish-led forces that have battled Islamic State while widening Turkey's territorial control at the border. It was Turkey's third such incursion since 2016. Motivated largely by the aim of containing Syrian Kurdish power, Turkey already has troops on the ground across an arc of northwestern Syria, the last stronghold of anti-Damascus rebels. (Reporting by Dominic Evans and Tuvan Gumrukcu in Istanbul and Tom Perry in Beirut; Editing by William Maclean) Pictured: Turkish army howitzers are positioned on the Turkish-Syrian border, near the southeastern town of Akcakale in Sanliurfa province, Turkey, October 7, 2019. REUTERS/Stringer
Close
1 / 8 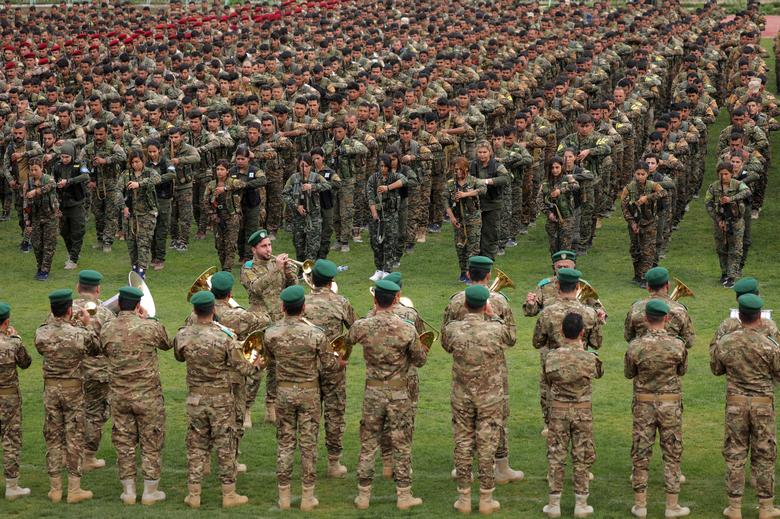 WHAT DOES TURKEY WANT? Turkey has two main goals in northeast Syria: to drive the Kurdish YPG militia which imore

Reuters / 2019年 3月 28日 星期四
WHAT DOES TURKEY WANT? Turkey has two main goals in northeast Syria: to drive the Kurdish YPG militia which it deems a security threat away from its border, and to create a space inside Syria where 2 million Syria refugees currently hosted in Turkey can be settled. It had been pushing the United States to jointly establish a "safe zone" extending 20 miles (32 km) into Syrian territory, but repeatedly warned it could take unilateral military action after accusing Washington of dragging its feet. President Tayyip Erdogan has recently talked about pushing even deeper into Syria, beyond the proposed "safe zone" region to the cities of Raqqa and Deir al-Zor, in order to allow still more refugees to return to Syria. Pictured: Kurdish fighters from the People's Protection Units (YPG) take part in a military parade as they celebrate victory over the Islamic State, in Qamishli, Syria March 28, 2019. REUTERS/Rodi Said
Close
2 / 8 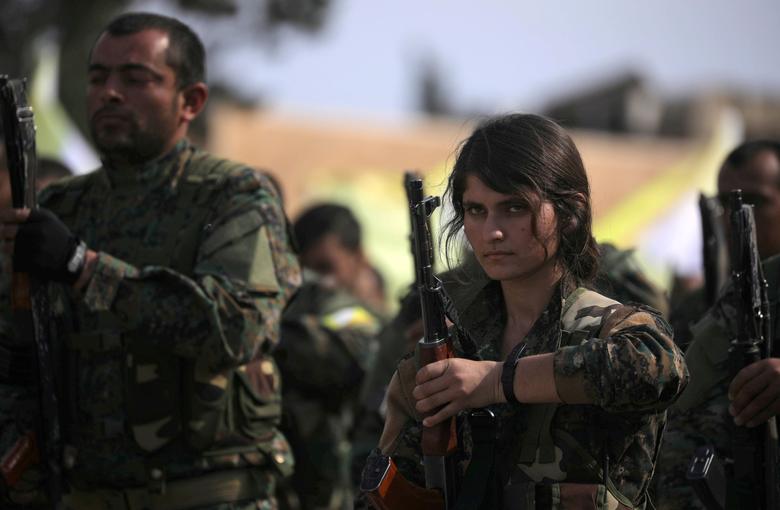 HOW WILL THE KURDS BE AFFECTED? The Kurdish-led Syrian Democratic Forces (SDF) have spent years expanding itsmore

Reuters / 2019年 3月 24日 星期日
HOW WILL THE KURDS BE AFFECTED? The Kurdish-led Syrian Democratic Forces (SDF) have spent years expanding its control across northern and eastern Syria, helped by the U.S.-led coalition against Islamic State. A rare case of a winner in the Syrian war, the Kurds and their allies have set up their own governing bodies while always insisting their aim is autonomy, not independence. All of this could unravel with Turkey's military advance. The SDF-affiliated Syrian Democratic Council has said an attack would trigger a new wave of mass displacement. For the SDF alliance, in which the Syrian Kurdish YPG militia is the dominant force, much will depend on whether the United States continues to keep forces in other parts of the northeast and east. A full U.S. withdrawal would expose the area to the risk of more Turkish advances, an Islamic State revival, or attempts by Iranian- and Russian-backed government forces to gain ground. Confronted by the prospect of U.S. withdrawal last year, the Kurds beat a path to Damascus for talks over allowing the Syrian government and its ally Russia to deploy at the border. The talks made no progress, but such negotiations could be an option again in the event of a wider U.S. withdrawal. Pictured: A fighter with the Syrian Democratic Forces (SDF) holds her weapon as they announce the destruction of Islamic State's control of land in eastern Syria, at al-Omar oil field in Deir Al Zor, Syria March 23, 2019. REUTERS/Rodi Said
Close
3 / 8 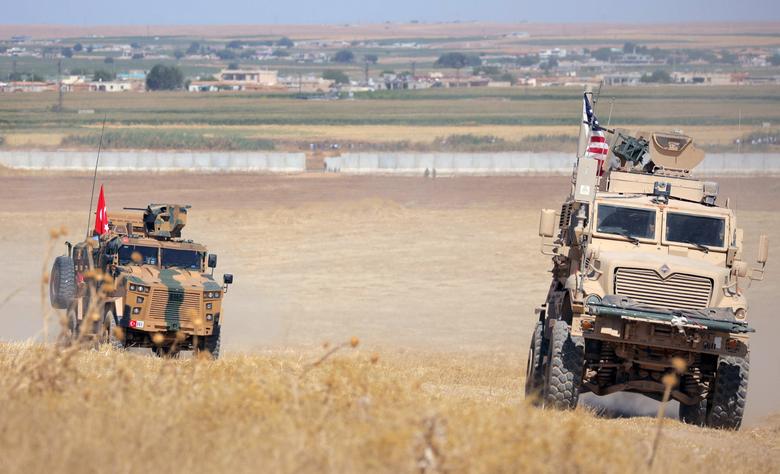 Reuters / 2019年 9月 8日 星期日
HOW FAR COULD TURKEY GO? The northeastern border region, currently controlled by Kurdish-led forces, stretches 480 km (300 miles) from the Euphrates river in the west to the Iraq border to the east. The immediate focus of Turkey's military plans appears to be around a section of the border between the towns of Ras al Ain and Tel Abyad, which are about 100 km (62 miles) apart. A U.S. official told Reuters on Monday U.S. forces had withdrawn from observation posts there. As well as air strikes on Ras al Ain on October 9, a witness in Tel Abyad said the sound of explosions rang out there and residents fled. Although under the control of Kurdish-led forces, that part of the border has historically had a strong Arab presence. "It's a region where the population is Arab and where Turkey has good ties with the leading groups," said Ozgur Unluhisarcikli of the German Marshall Fund. If the YPG tries to hold territory there "it will lose a lot of blood," he said. Pictured: U.S and Turkish military vehicles drive during a joint U.S.-Turkey patrol, near Tel Abyad, Syria September 8, 2019. REUTERS/Rodi Said
Close
4 / 8 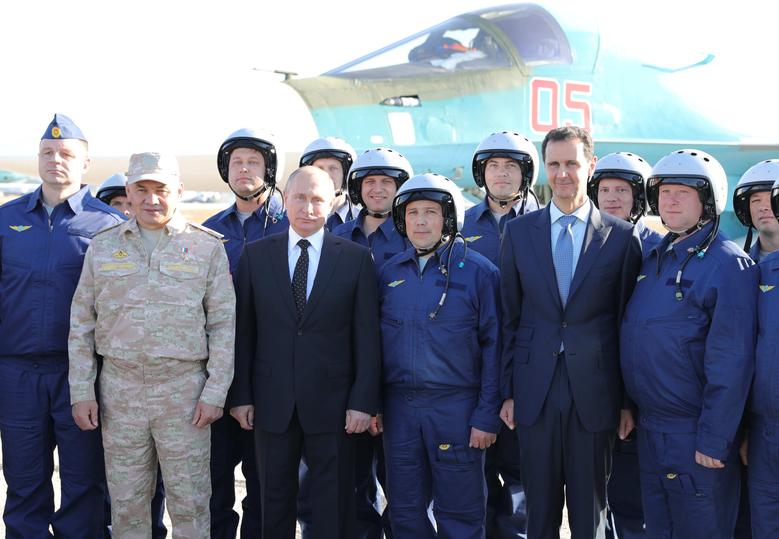 DO RUSSIA AND IRAN BACK TURKEY'S MOVE? Russia and Iran, the other two major foreign powers in Syria, stronglymore

Reuters / 2017年 12月 11日 星期一
DO RUSSIA AND IRAN BACK TURKEY'S MOVE? Russia and Iran, the other two major foreign powers in Syria, strongly support President Bashar al-Assad - unlike Turkey and the United States which both called for him to stand down and supported rebels fighting to overthrow him. Russia has said that Turkey has the right to defend itself, but Kremlin spokesman Dmitry Peskov said on Monday that Syria's territorial integrity must be preserved and that all foreign military forces "with illegal presence" should leave Syria. If the U.S. pulls out all its troops from northeast Syria, the Damascus government - backed by Russia - may try to retake control of much of the region not seized by Turkey. Pictured: Russian President Vladimir Putin (2nd L, front), Defence Minister Sergei Shoigu (L, front) and Syrian President Bashar al-Assad (2nd R, front) pose for a picture with servicemen as they visit the Hmeymim air base in Latakia Province, Syria December 11, 2017. Sputnik/Mikhail Klimentyev/Sputnik via REUTERS
Close
5 / 8 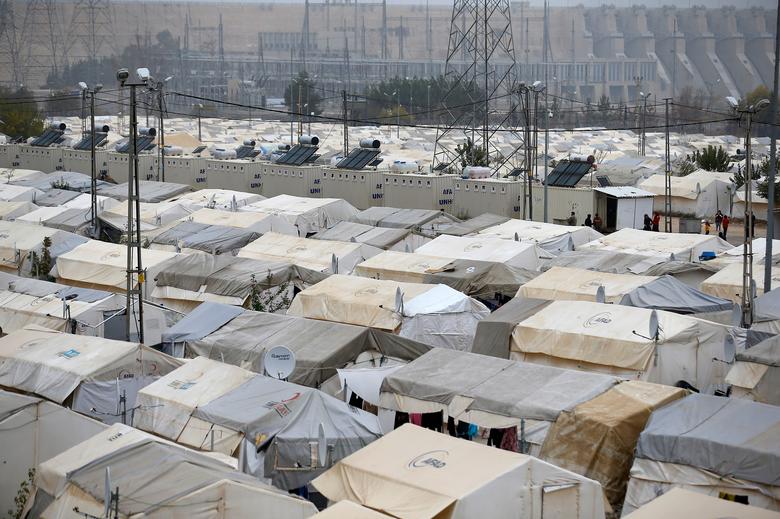 WHAT IS THE WESTERN REACTION TO TURKEY'S PLAN? There has been no public support from Turkey's Western allies more

Reuters / 2016年 12月 1日 星期四
WHAT IS THE WESTERN REACTION TO TURKEY'S PLAN? There has been no public support from Turkey's Western allies for its plan to settle 2 million Syrians - more than half of the refugees it currently hosts - in northeast Syria. A senior U.S. State Department official described the plan as "probably the craziest idea I've ever heard." The main Western concerns are that an influx of Sunni Arab Syrians into the largely Kurdish northeast would change the demographics of the region. The United Nations regional coordinator for the Syria crisis said all sides should avoid major displacement of civilians if Turkey launches an assault. Pictured: A general view of Nizip refugee camp, near the Turkish-Syrian border in Gaziantep province, Turkey, November 30, 2016. REUTERS/Umit Bektas
Close
6 / 8 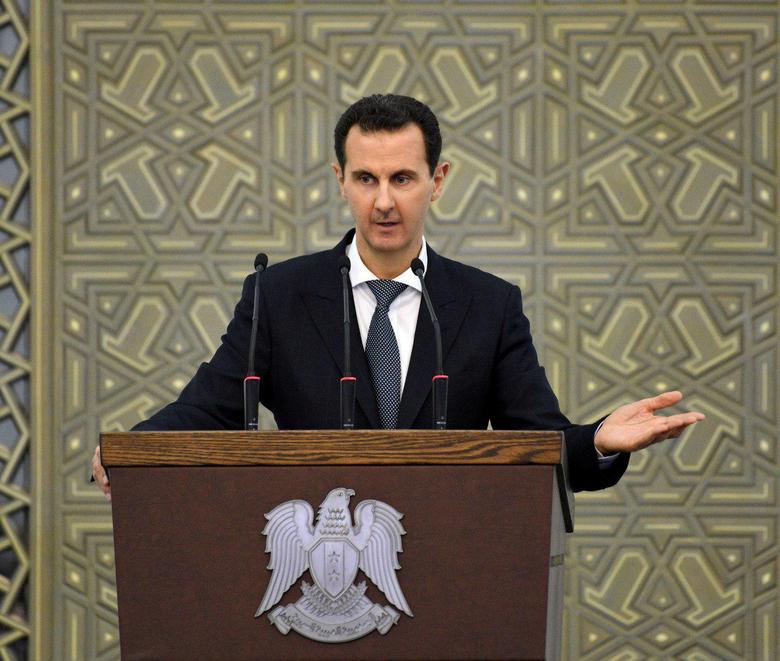 WHAT DOES THIS MEAN FOR ASSAD? While the territory in question is already outside Syrian government control, more

Reuters / 2019年 2月 18日 星期一
WHAT DOES THIS MEAN FOR ASSAD? While the territory in question is already outside Syrian government control, a Turkish incursion could mean the area switching from a non-hostile force - the SDF - to Turkey and rebels that have sought to topple Assad. Damascus has long viewed Turkey as an occupying power with designs on northern Syria. It has also at times suggested a willingness to strike a deal with the Kurds, though their last negotiations got nowhere. Pictured: Assad speaks during a meeting with heads of local councils, in Damascus, Syria in this handout released February 17, 2019. SANA/Handout via REUTERS
Close
7 / 8 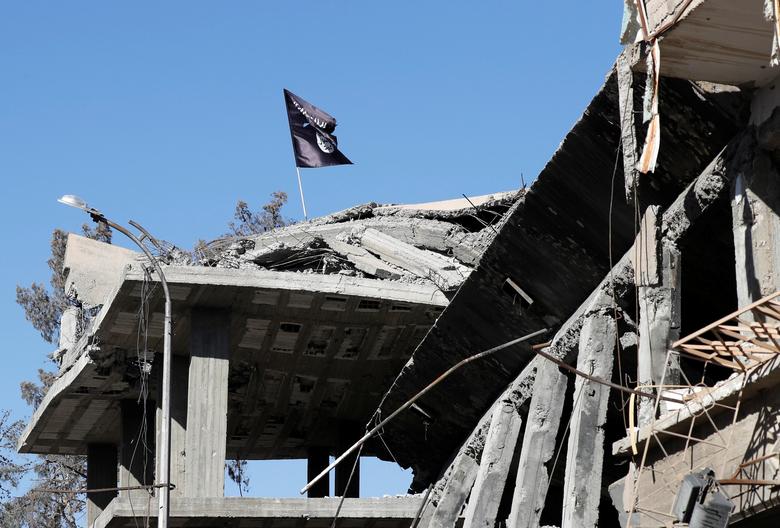 WHAT COULD THIS MEAN FOR ISLAMIC STATE? Chaos could present Islamic State with an opportunity to stage a revimore

Reuters / 2017年 10月 19日 星期四
WHAT COULD THIS MEAN FOR ISLAMIC STATE? Chaos could present Islamic State with an opportunity to stage a revival and the SDF has been conducting operations against IS sleeper cells since capturing its final territorial foothold earlier this year. Syrian Kurdish leaders have long warned that the SDF may not be able to continue holding IS prisoners if the situation was destabilized by a Turkish invasion. The SDF is still holding 5,000 IS fighters of Syrian and Iraqi nationality and a further 1,000 foreigners from more than 55 other states, according to the foreign relations department of the Kurdish-led administration in northern Syria. Pictured: A flag of Islamic State militants is pictured above a destroyed house near the Clock Square in Raqqa, Syria October 18, 2017. REUTERS/Erik De Castro
Close
8 / 8
分享图片集
重播
下一图片集 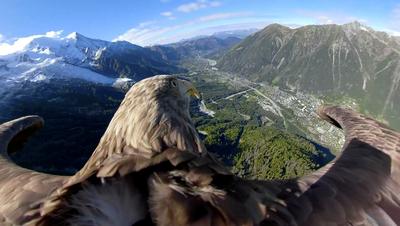 Eagle eye view of the Alps 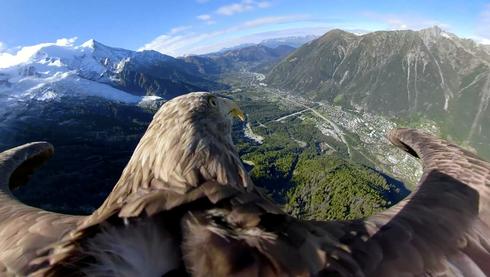 Eagle eye view of the Alps

Victor, a 9-year-old white-tailed eagle, wears a 360 camera to capture its spectacular flights over glaciers and mountains and raise awareness of global... 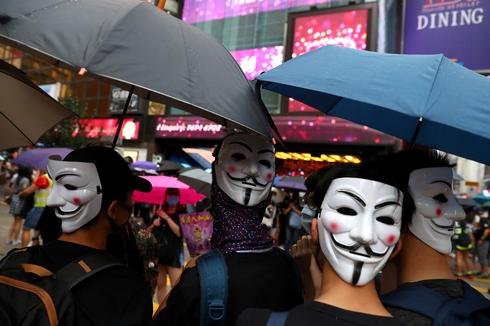 Protesters continue using masks to shield their identities and to protect their faces from police tear gas despite a ban under colonial-era emergency laws. 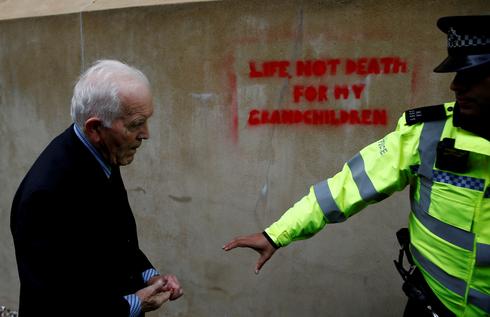 Octogenarian Phil Kingston has painted slogans, climbed on trains and sprayed red liquid at the British Treasury as part of Extinction Rebellion climate... 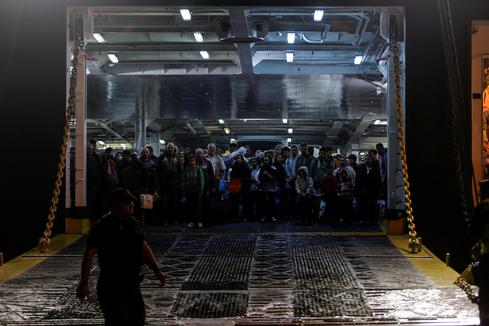 More than 450 migrants, many of them families with children, are transferred to the Greek mainland from the overcrowded Moria camp in Lesbos island. 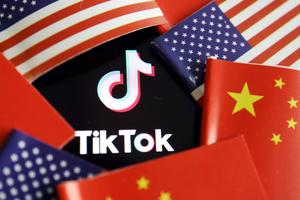 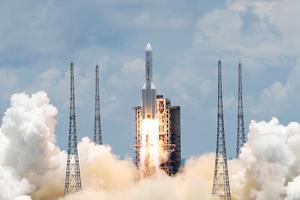 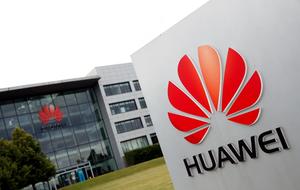 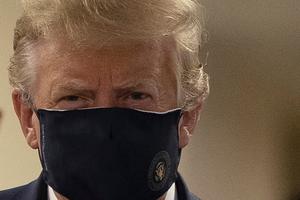 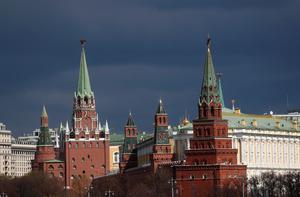 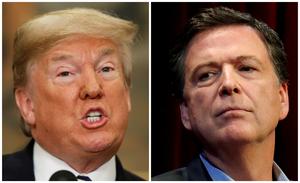 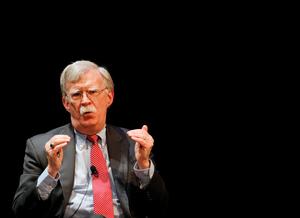 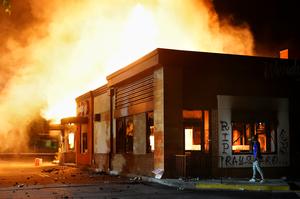 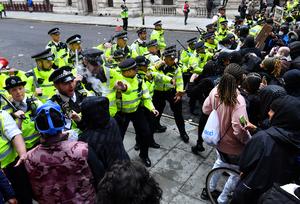